The Story of the Origin of the People of the Andes

We learn that everything that exists has a complementary relationship with a comparable companion force. If you take the time to look around you may notice that all living entities have a symbiotic bond with a partner of opposing but equal standing in the universe. The Qechua people of the Andes Mountains observed examples of this profound condition of the natural world, not only among plants and the animal kingdom, but also in the surrounding landscapes and celestial galaxies above. One entity could function alone, however, when coupled with another life force, the two become a more meaningful and harmonious unit, each benefiting individually and, as a result of their union, providing an advantage to nature’s complexity that may not have existed otherwise. It’s the most significant relationship in the universe. This was the principle foundation of the belief system that unified the native people of the Andes. Our ancestors of the Inca civilization embraced this wisdom of duality as the foundation of our understanding of the cosmos; the one that we call Pacha.

With the knowledge of duality we describe all living elements as Yanantin, and the complimentary force is known as Masintin. In order to survive and thrive, the two partners had to learn to co-exist without ego. For instance, we noticed that the law of nature that has pre-programmed every entity to reproduce itself can be witnessed through the process of pollination, when the male parts of plants shed their pollen and through various modes, transfer to the female parts resulting in new plants. With animals, we see that males and females are compelled to interact with each other to produce offspring.

The idea of Yanantin and Masintin penetrated every corner of our world. In our culture, even in the landscape, the feminine mountains, known as Pachamama, nourished life like a mother that gives her breast to her child. And her masculine partner, known as Apu, the tallest mountains often covered with snow, protected life as a father defends the well-being of his family. The winds were known as Wayra, the feminine good wind; and Machu Wayra, a masculine bad wind that could carry diseases. In the heavens, the celestial bodies had characteristics that attracted and complemented each other as well, The sun, Inti, was considered a masculine spirit and the moon, Killa, was the female complement. In their conception and understanding of the cosmos, the Qechua believed everything that we could see or feel existed with a counterpart.

According to our great-great grandparents, before humans, the realm of Pacha (the cosmos) contained an infinite energy called Kallpa. That vital force is what they believed was the origin of life. The dimension known as Hanac Pacha (heaven) was the heart of the origin of life. To be more precise, the essence of life began in the celestial river called Mayu (Milky Way). They mention that this divine supernatural feature could be seen from the earth with the naked eye and was greatly revered by our Andean ancestors. Our ancestors learned how to use their knowledge of Chaskas (stars), paired and grouped in constellations, as a tool to observe the world of the Taytas (deities).

Our quechua ancestors believed there were 3 pachas, or dimensions with individual Taytas being exclusive to the dimension in which they were created..
Hanac Pacha... the celestial world in the skies
Kay Pacha… the terrestrial world on planet Earth
Uccu Pacha… the internal or spiritual world all around

Kay Pacha. Our Planet
This is the time before human beings came into existence. The planet earth was occupied by living Taytas (gods and deities) including Pacha Mama, Apus, plants-Mallkis, rivers-Mayus, winds-Wayras, and animals-Uywas. Our ancient culture became one with all living entities in their surroundings and their relationship with nature became the foundation of our Qechua belief system. This is why my ancient grandfathers and grandmothers were known as nature worshippers. 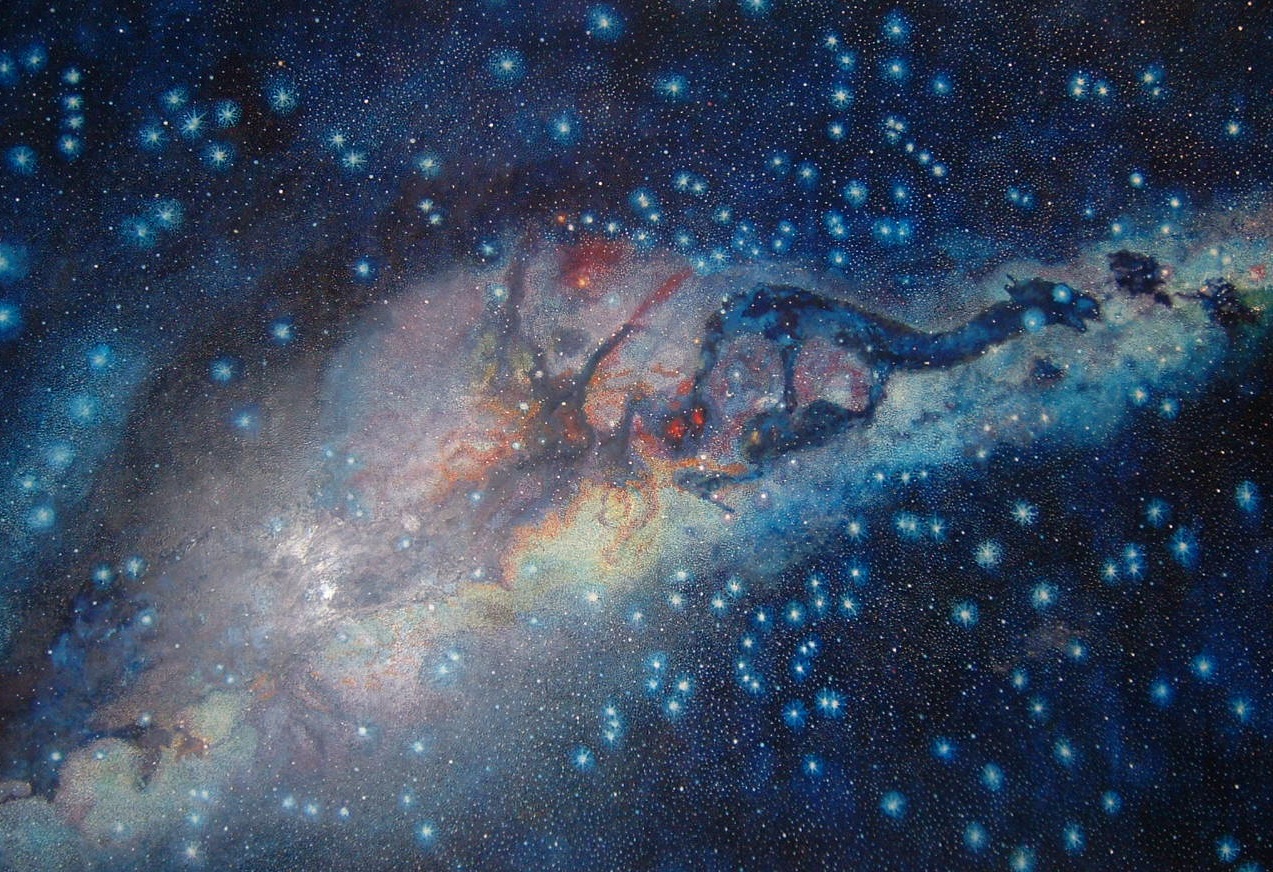 Hanac Pacha. Celestial World
The celestial Taytas, visible during the day, were the Sun and the Moon. Others that were more distant, could be seen clearly at night, including the life-giving Mayu (The Milky Way) The Andean concept of duality was evident even in the Milky Way where the observation of prominent dark blotches, known as Dark Cloud Constellations, was just as important as the reverence for the groupings of luminous specks known as constellations. In order to understand the luminous groupings, you had to also respect the relationship with the contrasting shadows and darkness.

The observant Qechua also recognized the importance of the dark zones in the Milky Way which were known as the Dark Cloud constellations. These blotches of dark space contained other geometric forms known as:
Amaru Machacway (The Serpent)
Hamppatu (The Toad)
Yuttu (The Tinamou - ground-dwelling birds)
Atoq (The Fox)
Kuntur (The Condor)

Uccu Paccha. Spiritual World
This is the world that humans can only reach through meditation or personal introspection. To know the spiritual world a person first had to understand their physical surroundings, including humans, plants, mountains and animals.

In our beliefs, not only the mountains, but all things, had a living spirit and a soul. Our shamans knew how to use plants like Banisteriopsis Caapi, also known as Ayahuasca, one of the main ingredients used in a psychoactive brew, to call the spirits of the mountains as well as the souls of their human ancestors. It was this knowledge of spiritualism that was known as Uccu Paccha, or the internal world. This awareness of spirit was the foundation of the burial practices of my ancestors.

When our ancestors died, their bodies were wrapped and prepared for burial. The mummies were always placed in the fetal position because this is the position that human fetuses are in prior to their birth into Kay Pacha. Being in the fetal position is the most advantageous for bracing the spirit of the dead person to be born again. Placed in the cliffs, mummies were protected and sacred. They were believed to be the vessels of all the accumulated wisdom and knowledge of the person who died, and for this reason they were greatly revered. Living Qechua people honored their dead with the presentation of small gifts to the mummy, a practice that we continue today. The parents of my parents could call the spirit of their forefathers to show respect for their wisdom and information from ancient times. And honor their ancestors.

Before the birth of humans, Taytas were the only living beings in the Pacha (the cosmos). Although all the Taytas were expected to function in harmony with all the gods in all the dimensions, Taytas were banned from wandering between the 3 different dimensions. The deities of the kay pacha, hanaq pacha and uccu pacha each remained in their own world. It wasn't allowed to interact outside their pacha or change the pacha they were in. It was the same as the fact that plants and animals can only mate with partners in their own species. Animals can eat plants, but they cannot reproduce new life with them.

Each Tayta was expected to function symbiotically with their partner. Pacha mama, from Kay pacha, had to take care of all her brothers and sisters, as the other Taytas were known to each other. Inti, sun, from the Hanac Pacha, provided energy for all the brothers and sisters in Kay Pacha, the planet Earth. So they learned to live one with the other.
One day, Inti sun, who was always collaborating with Pacha mama, entered into a forbidden relationship. The one that was not allowed. But they got to know each other because they always worked together to orchestrate the conditions that were favorable for plants and creatures to flourish, water to flow and winds to blow. Their unthinkable alliance resulted in the birth of the first group of human beings, who began using all the different elements that pacha mama did provide.

Through these oral stories, and the sharing of customs and folklore, our history was handed down from generation to generation; expressed in our language, our traditions, our songs and art.

Note about spelling of native words. Because the Qechua language is spoken, words are spelled phonetically and may have different spellings depending on the experience of the author.

Yurbi Villacorta Jaquehua Paypal Account For Contributions. 100% Goes to our Peruvian guides and their families.
https://www.paypal.me/Qosqotales

Note from Jacquie Whitt:  Writing this story inspired me to check out the best "Dark Sky" observation spots in the US. Turns out that Cherry Springs State Park in Pennsylvania is one of the top destinations for stargazing, in the world! Who knew? I just read that beginning on August 21, 2020, their website will post night-sky walking tours.

Other noteworthy spots for viewing the night sky in the US, are at Big Bend National Park in Texas, and Westcliffe and Silver Cliff in Colorado.  The Smokey Jack Observatory in Colorado is not hosting star parties, but images and videos can be viewed anytime on the group's Facebook page.