Children of the Sun

The Children of the Sun

One of the most popular stories told by our grandparents is the legend of Manco Capac and Mama Occllo. This story is also mentioned in several hispanic chronicles and best illustrates how the ancient cultures of the Andes, including my Qechua ancestors, conjured our first Inca rulers.

Here is a link to read the previous story, “The Story of the Origin of the People of the Andes” to get the background information about Inti (Sun) and Pachamama (Mother Earth).

This is the story my Qechua ancestors told to my grandparents, who told it to me.
A long time ago humans existed on our planet earth (Kay Pacha) where they lived all over in small groups. They prospered in different areas; some in the mountains, some in the jungle and many near the sea. Life was simple and easy, and people gathered and hunted for all the things provided by mother nature.

But without an official authority or leadership of any kind, people got a little lazy and drifted away from the practice of living in harmony with their surroundings. They resorted to fighting to resolve their disagreements, and they forgot how important it was to honor mother earth by displaying reverence and gratitude for the abundant life-giving products she provided. The degradation of civilized conduct caused Pachamama to become sad and cry, which led to strong rains and an unpredictable climate that contributed to the steady decline of living conditions. Inti Sun was also sad about the behavior of his earthly children, so he sent his son, Mancocapac, with his sister Mama Occllo to rescue and restore the human race. At the same time, the people realized that they needed a benevolent leader who could remind them from where they come and who their parents were.
Note: it’s important to understand that in Andean society all human beings are spiritually related as brothers and sisters from the same family. One of the ways we show respect to a stranger of our own age in our community is by greeting them as a sibling. “Wayquey” (brother; among boys), and “Ñañay” (sister; among girls). “Toray” (brother; among girls to boys) and “Panay” (sister; among boys to girls). If someone is older than you, he or she is a father or mother figure and you would greet them as “Papay” or “Mamitay.” We learn that we are all one from the same family, and will always be there to help each other. This idea is something that Spanish invaders could not understand. In their historical documents they described how the Inca would inter-marry with their brothers and sisters, not realizing they were not related by blood. Although Manco capac and Mama Occllo were spiritual siblings from the same parental deities, they were a romantic couple on earth.

Manco Capac and Mama Occllo were born in the highlands, in the water of Titicaca, the biggest and highest lake in the land. Inti Sun gifted his son with a Golden staff to present to his beloved mother earth, Pachamama, along with the following instructions. Inti told Manco Capac and Mama Occllo to look for a rich valley to build a new kingdom. He said, “You have to remind your brothers and sisters that we (Inti -Sun and Pachamama-mother earth) are your parents. You have to teach them how to respect nature, to cherish all living elements, and make sure that they take care of each other and return to a life of harmony. You will know that you have arrived at the perfect location when the Golden staff will sink easily into the earth. This is where you have to stop and build a temple to honor your mother Earth and father Sun.” 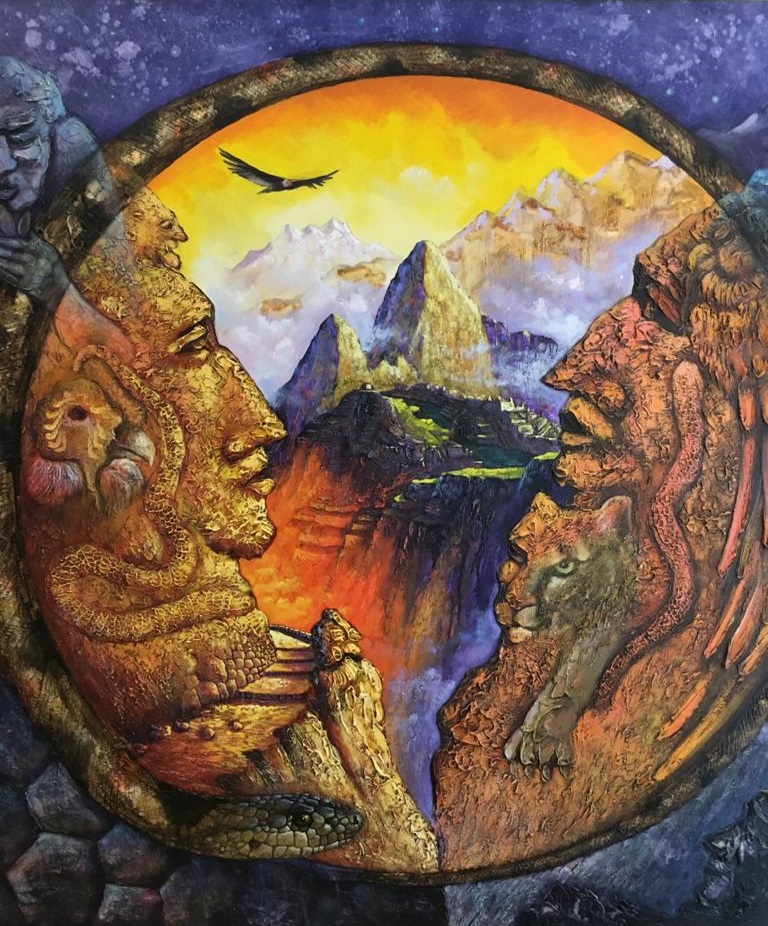 So with this mission, the children of the Sun began their journey in search of this holy place. They were adorned in the most resplendent costumes. Manco capac had a headdress known as Maskaypacha; a royal crown that was passed down to all the noble Inca kings. He wore a bright tunic, golden bracelets, big earrings and a golden breastplate with an image of the face of his father molded into the metal. In the same way Mama Occlo was clothed with brilliant colorful textiles and wore dazzling silver ornaments including bracelets, necklaces and earrings. They both appeared as majestic as any aristocratic emperor and empress in the entire world, and people who saw them were captivated by their elegance. Manco Capac carried the golden staff provided by his father and they began looking for the land where they could start the process of building a new sacred Inca empire.

They traveled by boat and on foot to the north, passing by different valleys, where they thrust the golden staff into the earth to see if it sank. But the staff did not sink at all. After some time they arrived at a place known as Pakarectampu, where they rested, and as was their custom, they made a ceremony known as Saminchay to offer a blessing to their beloved PachaMama. A few days passed before they continued on their journey. This time they knew they were getting close, as they headed up to Huanacaury Mountain, south of the Valley of Qosqo. From there for the first time, they gazed on a splendid lush valley. So they thrust the staff into the earth where it did disappear, just as their father told them it would.

This was to be the location of the new Inca territory, the one that they called Tawantin Suyo (the Four Kingdoms of the Sun). It was the perfect place to begin again, with a rich spongy soil, abundant water, and a great valley with space to do all the work that needed to be done. Manco capac gathered the men to teach them how to build canals to reorganize the water, construct terraces in order to gain more planting space in the valley, and most importantly, Manco made sure they understood the importance of expressing their gratitude to Pacha mama and Inti Sun.

In the same way, Mama Ocllo did gather the women to teach them how to handle llamas, produce textiles and clothes for their families, and understand the lifecycle of the different plants and ecosystems.

This was the beginning of the new era of the Inca nation and all the people in the Andes.

Note about spelling of native words. Because the Qechua language is spoken, words are spelled phonetically and may have different spellings depending on the experience of the author.

Yurbi Villacorta Jaquehua Paypal Account For Contributions. 100% Goes to our Peruvian guides and their families.
https://www.paypal.me/Qosqotales