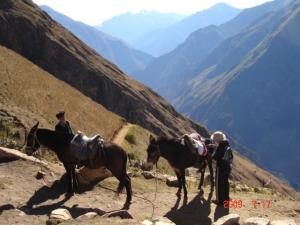 Looking for adventure in 2015?  How about an old-fashioned 5-Day trek to Choquequirao ruins?  Reserve your hike now. Click here to see full details

Elected by National Geographic Travel magazine as one of the best travel destinations in the world for 2015.  Visited by no more than a handful of adventure-seeking hikers each week, the rugged  Choquequirao ruins, are also known as the sister ruins of Machu Picchu.   With an impressive array of Inca terraces and buildings, the ruins can only be accessed by trekking on foot.

In 2014, the government announced plans to build the first aerial tramway in Peru.  To Choquequirao.  Expected to deliver up to 3000 visitors per day, the tram will attract not only tourists, but hotels, restaurants and all the amenities associated with big tourism.

Close to 50% of the ruins are still shrouded in heavy vegetation, but the overall size of the ancient city is about 1800 hectares.  The tramway is expected to open up other archaeological ruins in the region,

Some say that increasing visitors to Choquequirao will shift the wear & tear of constant tourism from Machu Picchu.  The folks at UNESCO have their eyes on Machu Picchu.  But no one wants to protect the golden egg more than the Peruvian government.  Others say the price of development is expensive.  Part of the charm of Choquequirao is that some of it still belongs to the jungle.  Expanding the tourism will change that.

In defense of the Peruvian government, we want to point out that they have not allowed any modern development or embellishments to the sacred grounds of Machu Picchu.  Limited traveler amenities are only offered in the area around the main entry. Once you pass through the Machu Picchu check point, you will not find restrooms, cafes or facilities of any kind.  You cannot buy bottled water or go to the toilet. Many visitors to Machu Picchu are surprised to discover limited guard rails and hand rails, and no assistance for visitors going up and down the many stairs and terraces.  It's impossible not to imagine the city in its natural state, because it is in its natural state.  We think it's refreshing that the temptation to make money off the travelers who visit the ruins every day, has not influenced development inside the city walls by the Peruvian government.

Let's hope the same is true for her sister, Choquequira. About to be born.