March 2020. The rainy season in the Andes is known for its unpredictability. Beginning every year in December (ish), you never know where the precipitation will hit the hardest and what region will be affected the most. Coastal flooding in Peru dominated the weather news last year, and in past years, Machu Picchu was actually closed, or rather empty, due to mudslides that took out the tracks to the train which is the main means of transportation to get there. By late March, rainfall tapers off and everything is lush and green and the mean old rain becomes a distant memory.

This year. it all started in late February, when a huge chunk of glacier collapsed from Salkantay Mountain and fell into the Salkantay Cocha lake. The theory is that it generated a huge debris flow. The Peru Ministry of Environment dispatched a team including engineer, Oscar Vilca Gómez, a specialist in Hydrology and Glaciology, who reported that approximately 400 thousand cubic meters of a mixture of ice and rocks fell off the west face of the snow covered mountain, falling into the Salkanraycocha lagoon The lake overflowed and precipitated a sudden increase in the flow of the Salkantay River.

Which when combined with seasonal rains triggered massive flooding downstream, furious enough to take out villages, bridges, homes, roads, communication and electricity in the region. Helicopters were dispatched to rescue local people who were lucky enough to escape.

The region behind Machu Picchu, known as the District of Santa Teresa in the Salkantay basin, was thrashed by seasonal rain that flooded out homes near the river, caused mudslides to close the Inca Trail and then dropped a massive boulder the size of a dump truck on the tracks closing the Hidro-electric train to Aguas Calientes.

Known as the "jungle" route to Machu Picchu, the bucolic backside of Machu Picchu with the semi-tropical climate is an attractive lesser known route for adventurous travelers looking to avoid the bustle on the main corridor to the ruins. And it's the end of the Salkantay Trek. The isolation from the rest of the region including Sacred Valley and Cusco makes it difficult to assess the level of damage.

Is Salkantay Trek Open?
In case you haven't heard, Salkantay Treks are cancelled until further notice. It's not just a matter of grooming the trail. Until it's safe for residents to move back to the small villages, and roads and communication are restored, it is not safe to run Salkantay hikes. It's estimated to be at least one to two months before the region will be ready to host hikers on this trail. For people booking Salkantay treks, we are able to confirm and set up your hikes with the understanding that if the trail and region is not still open by the time you arrive, we will substitute either Cachiccata (Quarry) or Lares Valley Hikes. And you have the choice to add on the 1 Day Inca Trail.

The Inca Trail is temporarily closed until March 16, 2020.

Authorities at Machu Picchu closed the trail network following mud and rock slides caused by heavy rainfall at different sections of the trail. Near the last week of February a landslide trapped 3 people working near the Pacaymayo Alto camp area. One person died and others were injured. Contact your tour operator for updates before you plan any hikes in the area. In the past when landslides closed the 1-day Inca Trail, they were able to arrange for the train to stop at another spot where hikers could access the trail. But that doesn't appear to be an option this year. Machu Picchu ruins are accessible by train and remain open from 6am-5:30pm daily.

The most recent rain related event is the boulder that slipped onto the tracks closing the route from hidroelectric to Aguas Calientes. Adios Adventure Travel is temporarily not running hikes on the Salkantay Trek because the District of Santa Teresa is not safe for tourism.

Yes. At this time access to Machu Picchu has not been affected. The train running from the main station in Ollantaytambo to Aguas Calientes is fully operational.

Check back. We'll keep you updated as more details come in. Posted February 29, 2020. 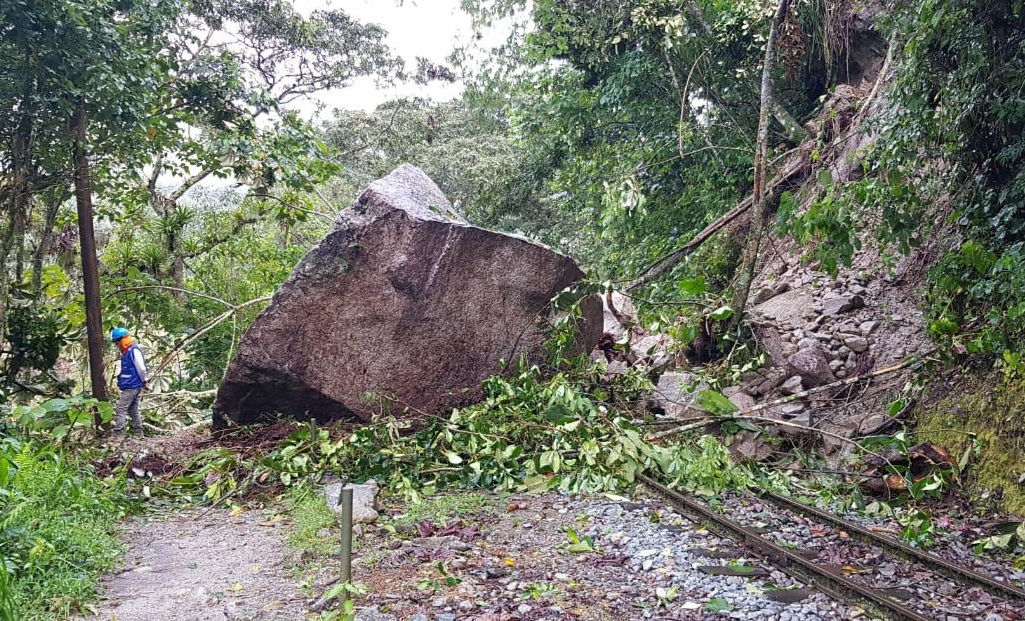