On December 10, 2018, the Peruvian government launched a new website with yet again a new system for booking tickets. Now all tickets are displayed by the hour of entry. For full details follow this link to the updated story.

If you want to read below, this will give you the history of changes to Machu Picchu entry tickets since 2016. After December 10, 2018 portions of this information may be outdated.

In case anyone is under the impression that the "New Rules" for half day entry tickets to Machu Picchu have anything to do with limiting the number of visitors to the citadel, there is no connection. The Peruvian government has not taken any steps to reduce the number of visitors to Machu Picchu. As a matter of fact, on July 1, 2017, they more than doubled the amount of tickets available for purchase. The Peruvian government did change entry tickets to half day. But was it to reduce the steady stream of humanity making their way to the Andes Mountains? I don't think so. I went to the Peru government website and collected the data. Because numbers don't lie.

What Changes did the Peru Government Implement on July 1, 2017? 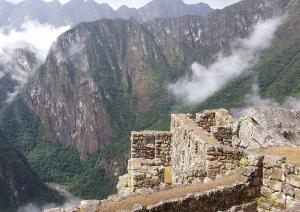 The Peru government changed all entry tickets to half day, and, on the same date, increased the number of tickets from 2500 to 6534 per day. Was it sneaky? Or shrewd marketing? Did no one notice? After the Peru government announced the change to half day tickets, headlines about the "New Rules" started popping up, but nothing was ever said about the increase in ticket numbers. Honestly the majority of visitors (based on feedback from our team of guides) have their fill of ruins within 3-4 hours at most. A small minority of visitors want a full day inside the ruins, and they can still buy 2 entries in the same day.

In September 2016, the Peru government set up three 1-way circuits inside the ruins, (which has been changed to 2 circuits in January 2019), then built a dedicated exit gate. Visitors could choose the route that they wanted and after exiting they could re-enter the ruins on a different route. Additional rangers have been placed inside the park and small gates are used to manage the flow of traffic. These changes probably had the most profound affect on protecting the physical ruins. Gone were the days of wandering willy-nilly, back and forth, up and down anywhere you wanted. Moving in 1 direction was a huge improvement in reducing the bottle-necks on some of the steep, narrow steps and paths which were never designed for hordes to move in 2 directions simultaneously.

Why Did the Peru Government Change to Half Day Tickets?

The change to half day entry tickets is publicized as a means to redistribute the flow of foot traffic, because a limited number of people can enter in the morning wave from 6AM-12N, and limited visitors arrive for the afternoon wave from 12N-5:30PM. (starting in January 2019, tickets are sold for entry on the hour) Human traffic is the biggest factor affecting the conservation of the ruins. And like other overused travel locations in the world, the visitors that are denigrating the sites they visit, (just by being there), are essential to the economy of the country. Rearranging the flow of visitors was a brilliant strategy to increase the number of tickets sold. And the Peru government website shows there was an increase in the number of tickets available after July 1, 2017. The number of tickets available went from 2500 per day to 3267 per wave. That's 3267 in the morning and another 3267 in the afternoon. The total visitors per day could be a whopping 6534. That's a net increase of 4034 people per day from the previous 2500 per day limit. So much for curtailing crowds and preserving the ruins!

Were the Peruvian guardians of Machu Picchu getting squeezed by the watchdogs at UNESCO? Was Machu Picchu at risk of being put on the dreaded "endangered" list if something wasn't done to curb or control the flow of tourism? At first glance, it looks like the plan to invoke half day tickets would better distribute the masses throughout the day. Like Senators passing a bill in Congress, the Peruvian authorities seemed to have tacked on a "rider" that included an unprecedented increase in the number of tickets they could sell in one day. I doubt an increase of that size would have been possible without the distraction caused by the new rule to half day tickets. Did they do it for money? You betcha. I can't think of any other reason to increase the number of available tickets by that much.

Here's a link to the latest Machu Picchu News stories.

I went to the official Machu Picchu government website and reviewed the statistics on the number of tickets sold.

What does this mean?

It doesn't appear to me that the new rules had any adverse affect on the escalation of visitors going to Machu Picchu in 2017. In early 2018, the number of tickets bought were down, however, by the end of August 2018, ALL ENTRY TICKETS FOR BOTH MORNING AND AFTERNOON WAVE, AND ALL HIKES, WERE SOLD OUT IN JULY AND AUGUST. Once all tickets sell out, not even God can get in to Machu Picchu.

(By March 1, 2018, all permits for 4-Day Inca Trail Hike were completely sold out through the end of August. But we all know that hikers are a different breed of homo sapien. And if every single permit for the 4 day Inca Trail sold out, that would amount to 66,000 additional visitors to Machu Picchu per year. Not counting permits for guides and porters)

There is one bathroom at the main entry. The cost to use the bano doubled from 1 sol per person to 2 soles per person in 2018.

Are the Authorities Doing a Better Job of Managing the Visitor Experience?

I think the most important thing that people planning a trip to Machu Picchu should do, is stay up to date. I try to post news about Machu Picchu as soon as it happens. Having accurate up-to-date info will be the best way to prepare.   CLICK HERE FOR MORE: Machu Picchu News

Do I have any good news? Yes. As a matter of fact I do. We're happy to report the latest trends at Machu Picchu indicate crowd control strategies are paying off.  Click here to read full details.

When is the best time to travel to Machu Picchu to avoid crowds and avoid the rainy season?

Let me know what your thoughts are. Click here to send an email to me through our contact page.