(continued from "Off To Northern Peru," part 4)
In spite of the fever, we decided to continue with our planned itinerary. We would take the local equivalent of a Greyhound bus and travel all day over a really big mountain pass to arrive in the middle of nowhere (I mean the town of Chota). My son's fever was the same as the day before. Maybe 102 or 103, F, (you folks who use Celcius will have to convert). 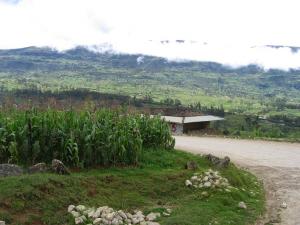 the luggage compartment.  Between the two of them, I couldn't imagine anyone grabbing our bags. We spent the day traveling to Chota, a small, remote town on the other side of a 15,000 f.a.s.l. mountain pass. (opportunity for another conversion for people who measure in metrics).

The paved road eventually ended and the second half of the ride was on dirt. The switchbacks were so tight, the bus would often back-up to make the turns. I hear the views were incredible. I couldn't tell you, my eyes were not only closed, they were gripped closed. I'm sure I heard the boys snickering the now infamous, "Welcome to Kazakhstan" more than once that day.

We drove through a gold-mining area, mostly run by Americans. Our new guide did not have much good to say about that subject. That's the only time we ever saw heavy machinery in Peru. The rest of the country is built by hand and sweat. After what seemed like days on the bus, all the Peace Corps volunteers got off.  We stayed on. It suddenly occurred to me that we were going someplace that was more remote than the place where Peace Corps volunteers work. Just how remote was this place?  (if you're one of those people who want  Google maps to try to find our location, here it is).

It had rained on and off all day and on our way down the backside of the mountain, the bus came to an abrupt halt at what appeared to be a fast-moving Colorado River crashing down the side of the mountain and OVER the road.  I glanced out the window and immediately assumed we would have to turn around and go back.  Boy, was I wrong!  What happened next, happened quickly before I had a chance to rouse the kids and jump off the bus.  I heard the engine rev and suddenly the bus plunged into the river.  I clutched my pearls one last time and gasped for air while my mind was flashing to a CNN news story announcing the death of 9 Americans on a bus that fell into a river in Peru.

The thing I did not realize, but later came to understand and even appreciate, is that Peruvians do this kind of thing every day.  That driver had probably plunged into that overflowing wash many times and if anyone was capable of pulling off the feat, he was. His judgment was honed from having done this, perhaps many times. We Americans have created an environment that protects us from those experiences.  We are insulated from anything that might be perceived as dangerous, let alone actually harm us.  (except maybe our love affair with the almighty automobile, although we don't perceive them as being dangerous).  By avoiding these kinds of experiences, we have lost our ability to make judgment calls and perhaps even more sadly, we have succumbed to the notion that we must follow the rules all the time.  A notion that sounds good on paper, but sometimes requires the insight to know how and when it's appropriate to break the rules. (I hope all of the students get to read this!)

By the time we reached our destination, I was in love with the bus driver.  (not just because I was alive.)   I didn't even know what he looked like.  He had delivered us safely to a place normally reserved for National Geographic specials on TV,  perhaps hosted by celebrity chefs, journalists or high-profile personalities, all paid to entertain while we sit in our armchairs firmly gripping an adult beverage.  Now we were cast as TV hosts of our own lives.  We watched the drama unfold as observers, helpless to affect the outcome in any way.   This was living without the safety net of our society.   It just doesn't get any more alive than that. Well, at least not until we arrived in Chota. (continue to: "At Least He Could Walk to the Village Hospital" part 6)