Peru: At Least He Could Walk in to the Village Hospital (part 6)

Peru: At Least He Could Walk in to the Village Hospital (part 6)

(continued from "Traveling Where the Paved Road Ends" part 5)
Everything was dark except for one lighted sign in the rear of the hospital. The word "Emergencia" glowed in the darkness. After the bus arrived in Chota, the rest of the group hopped into waiting 4-wheel drive vehicles for the kidney-crushing 12 Km ramble up the mountain to their lodge.

My son and I stayed in Chota with "the Professor" and our "almost-bi-lingual" guide. (to be fair, I'm in the same position!) The hospital gates were opened by two men 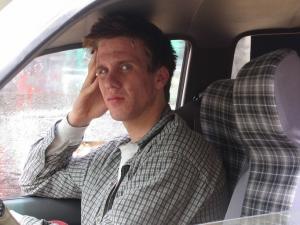 from the other side and then closed behind us.  We were the only people at the hospital and parked at the back door.  My 6"7" son was still able to walk, (thank God), so we entered the hospital and walked down the dark hall to the only lighted room in the building. In the hallway, with his hands tucked neatly into the pockets of his white doctor's jacket, stood our Spanish-speaking doctor, bathed in the light of the exam room.

Service here was really good. I carried all our backpacks, cameras, passports, jackets, raingear and what seemed like 14 other dangly things from my shoulders, arms and waist, while fumbling for my dictionary. Meanwhile I tried to pay close attention while the native Spanish-speaking men started discussing my son's symptoms. In Spanish. Once in a while, a recognizable word would hit me and I would quickly start flipping the dictionary. I know plenty of Spanish.  I can ask for anything. I can inquire for directions.  I can order guinea pig off menus. (for other people, not for me)  I can negotiate cab fare and cuss out cheating cab drivers. But I cannot, even under duress, understand medical terminology and apparently neither could my dictionary (or our guide).  Nada.  No existe.

It's times like this that you wish you had continued your college Spanish to the conversational level.  And I really missed Vidal and his full command of the English language. Travel tip: If you're going to bother to learn another language, do yourself a favor and learn all of it!  Don't stop at Spanish III.  Go on to conversational Spanish.  Take it home people!

The doctor palpated my son's neck and took his temperature with a thermometer that worked.  After 5 -10 minutes of talking, translating and hand signaling, the doctor looked at me and offered to put my son in the hospital and administer an IV. OMG, he must be dying.  My exterior remained calmed, while my interior panicked big time.  What if I refused?  Could they hold my son against my wishes?  I just didn't know and so I calmly asked if we could check in to a local hotel for the night and evaluate again tomorrow.  The doctor kind of shook his head in little side-to-side motions, which I interpreted to mean, "sure, if that's what you want to do."  More discussions ensued in Spanish, which I hoped were discussions about what hotel to go to.

The somewhat-English-speaking guide finally said they would take us to a hotel.  I was relieved, but only for a moment, because I realized my son was still sick.  Whatever it was, we would ride it out in the hotel.  Without Vidal.  Man, I wished he were there.   I felt alone and totally responsible.  I was making potentially life-changing decisions without the "benefit of (English) counsel." I offered to pay the cost of the emergency room visit, but " The Professor" whipped out his wallet and covered the $4 bill without hesitation.  (your eyes are not deceiving you, you saw it right, the ER bill came to $4). (continue to part 7)

We received a prescription for antibiotics and the guide and I would get that later, after we settled in the hotel. Our entourage exited the hospital, loaded into 3 motorized tricycles and drove out into the streets of Chota.  After 5 minutes of driving through narrow, cobbled streets, we arrived and just stopped in the street in front of a hotel located on the second floor, above the crowded streets.  We hauled up our luggage and "The Professor" and the guide made the arrangements for my son and I to share a room.  The first room wasn't the right configuration between the toilet and the shower, so I asked to be moved.  For what was about to happen, we needed the toilet and the shower right next to each other.  That's the most polite way I can put it.  And we could have used a few extra towels. (continue to "Peru Comfort Food" part 7)