Just arrived in Cusco: who is this guy? (part 2)

Just arrived in Cusco: who is this guy? (part 2)

(continued from part 1)
The next morning, we filtered down to breakfast and boarded the van to return to the airport where we would fly to the city of Cusco at 11,000 feet above sea level.  Maneuvering a herd of teen-agers was wearing me down and after all, I am only human. "Teacher Jacquie, when is lunch? Teacher Jacquie, what time do we arrive?" And my all time favorite, "Teacher Jacquie, where's my boarding pass?"  You get the idea. 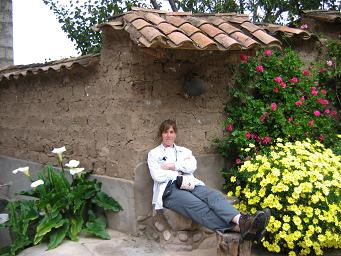 It didn't help that we got stopped at the baggage screening checkpoint when one student had something in his carry-on backpack that the agent was sure was a pair of scissors.  We were pulled to the side, the bag was emptied and the agent sent the bag through the x-ray machine many times and even showed me the object on the monitor.  Something was there.  Not sure how we passed through U.S. inspection, but that wasn't my worry at this particular moment.

The student was clueless and claimed he had borrowed the backpack from his terrorist father. (just kidding)  I made a mental note to share this story on future trips when people borrow baggage. Finally, the agent pulled out a knife and cut a hole in the backpack, "put in his thumb and pulled out a pair of 8 inch scissors!"  Whoa!  Where did they come from?  The scissors had fallen between the interior layers and were not visible to the naked eye from inside or out. I believed the student when he said he didn't know they were there. It was just one of those things.

The triumphant agent was smiling, (which I took to be a good sign that we wouldn't be taken away to prison or interrogated about any plans we harbored to take over the country) and we were sent on our way. By the time our airborne transport touched down in Cusco, I was ready for a vacation.

The eyes in the back of my head were tired from being on constant vigile and I hadn't slept well in Lima.  Then, there he stood.  All 5' of him. Vidal Jaquehua,  holding a small, dry-erase board, with our misspelled, but recognizable name on it.  I was in the habit of barking orders and telling kids where to stand and what to do because I had been doing it non-stop for over 24 hours. (although some people will claim that I have been doing it for years!)  With a smile on his face, Vidal coaxed the reins of control out of my hands and pulled off  a coup-d'etat, that any power-hungry, gun-wielding,  developing-nation, militant would be proud of.

He grabbed bags and directed us to a van in the parking lot of the Cusco airport.  He spoke very good English and patiently answered (did you notice that he had patience?) any question that was thrown at him.  I actually remember the moment I relaxed.  It was momentous.  Without any struggle, Vidal took charge of all of us.  It was such a relief.  I willingly relinquished my pants-wearing status. (continue to "Our Guide, Our Mother and Out Chicha Beer" part 3)