Would your travel agent do this for you?

Would your travel agent do this for you?

It was their family trip of a lifetime.  Twelve days in Peru including a 5 day trip to the Amazon jungle, followed by 4-day hike on the 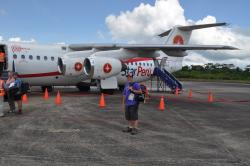 famous Inca Trail to Machu Picchu.  Steve contacted Adios Adventure Travel and booked the trip for his family of 4 more than 8 months in advance. Vidal and I reserved the hotels & jungle lodges, set up the domestic flights and got the permits for the hike.  Everything was set for an amazing trip to South America over the Christmas holidays.   A few days prior to departing from their home in Chicago, I sent the final comprehensive travel document which outlined the day to day activities and included confirmation codes and ticket numbers.

No one can predict how the weather or airplane mechanical problems will affect a trip and what happened on this trip is a glaring reminder of how out of your control it is. Steve was scheduled to fly from Chicago to Houston and Houston to Lima the same day.  Once he arrived in Lima, he would walk over the skybridge from the terminal into the Ramada Inn.  The next morning, he would walk back and checkin for his flight to Puerto Maldonado, the starting point for his journey into the Amazon Rainforest.

The first signs that the universe had it out for Steve, was the day before Steve departed the US.  Ramada Inn contacted Vidal and informed him they were overbooked and they could not accommodate the family.  Vidal was able to find another hotel, but it required a less-than-convenient transfer back and forth from the airport.   All of which was arranged.  I was able to call Steve and keep him updated with the last-minute changes.

But that was just the beginning of the troubles.  Mechanical problems in Chicago delayed the flight to Houston and Steve and his family missed their connection to Lima.  Unfortunately, the next flight to Lima wasn't until the same time the next day.  This meant everything would be delayed one full day and Steve and family would overnight in Houston. Steve was able to text me with updates from the Chicago airport and once we realized he would not make his flight to Lima, we kicked in to gear and Vidal and I started the process of moving everything back one full day.

It was not possible to shift the entire trip down by one day.  We would have to remove the first day of the trip and the family vacation would start on what would have been the second day.  Meaning that they would lose 1 of their 5 days in the Amazon jungle.  So I notified the Amazon lodge of the delay and they were able to make adjustments for the transfers to the lodges. Vidal contacted Star Peru airlines, but all the flights to Puerto Maldonado the next day were full.  Thankfully, the agent was able to reroute the family to Cusco and then on another flight from Cusco to Puerto Maldonado.  Miraculously, the luggage made it as well.

Then Vidal contacted the hotel in Lima.  Fortunately, there were vacancies the next day and he was able to reserve rooms for them.  Meanwhile, I contacted the driver in Lima to notify him of the changes for the transfers between hotel and airport. Star Peru would not make the changes without charging a penalty that amounted to slightly more than $100 pp.  Vidal contacted me to inform me of the situation. We were smack in the middle of making a critical decision at that point.  Steve was mid-air on his flight from Chicago to Houston and not available.  Vidal asked me if we should cover the additional charges so we could move forward with the new reservations and hope that Steve agreed with us.  My guts said yes, this was the right thing to do.

We covered the fees for the flights and paid for new hotel reservations.  It was too late to cancel the original hotel reservation, so we lost those funds.  Hopefully, Steve would recognize the difficult position we were in and agree to reimburse us.  At this point, the tab was $630 USD for all the changes.

When they finally arrived in Lima, all the new arrangements were confirmed and the family barely noticed the changes. Steve's family had their amazing vacation.  Minus one day.  After Steve returned home, I contacted him to ask if he planned to file a claim for the unplanned expenses with his insurance company.  He told me that he never buys travel insurance  He has traveled abroad with his family many times and had never needed it.  This was the first time anything like this happened.

And Steve willingly paid all those fees, without any hesitation.   Sombreros off to Steve for being a decent guy.  Because I had communicated with Steve for several months prior to his departure, I felt I kind of knew him.  Vidal and I did the right thing and so did Steve. While no one can guarantee an outcome as successful as this, the real question is, would the travel agent or operator you're working with be willing to make the extra effort for you?

Ready to set up your trip of a lifetime?  Contact us anytime.